Veronica Alfano is a Faculty Fellow at the University of Oregon.  The author of several articles and book chapters on Victorian poetry, which focus in particular on gender and genre, she is currently completing a monograph titled The Lyric in Victorian Memory:  Poetic Remembering and Forgetting from Tennyson to Housman.

Alison Booth is Professor of English at the University of Virginia.  Her books include How to Make It as a Woman (winner of the Barbara Penny Kanner Award) and Greatness Engendered; she is also the curator of the database Collective Biographies of Women: An Annotated Bibliography.

Ruth Brimacombe is Associate Curator at the National Portrait Gallery in London. She received her doctorate from the University of Melbourne in 2008 and is developing her thesis on "Imperial Avatars: Art, India and the Prince of Wales in 1875-6" for publication.

Susan Brown is Professor of English and Theatre Studies at the University of Guelph.  Her research centers on a digital textbase for feminist scholarship—the award-winning Orlando Project (www.ualberta.ca/orlando), which has received funding from the Social Sciences and Humanities Research Council of Canada’s Major Collaborative Research Initiatives.

Alison Chapman is Associate Professor of English at the University of Victoria.  She recently published A Rossetti Family Chronology (Palgrave 2007); she is the Director of the Victorian Poetry Network and the Editor of the Database of Victorian Periodical Poetry.

Ryan Cordell is Assistant Professor of English at Northeastern University and Core Founding Faculty Member in the NULab for Texts, Maps, and Networks (http://nulab.neu.edu). His scholarship focuses on convergences among literary, periodical, and religious culture in antebellum American mass media.

Lisa Hager is Assistant Professor of English and Women’s Studies at the University of Wisconsin-Waukesha. Her current book project looks at the relationship between the New Woman and the Victorian family. Lisa is the managing editor for the Journal of Victorian Culture Online.

Natalie M. Houston is Associate Professor of English at the University of Houston. She is the Project Director for the Visual Page, an NEH-funded project to develop a software application to identify and analyze visual features in digitized printed books. She is currently writing a monograph entitled Reading Victorian Poetry Digitally.

Christopher Keep is Associate Professor in the Department of English at the University of Western Ontario. His articles on nineteenth-century literature and culture have appeared in numerous journals and in several collections of essays.

Peter Otto is ARC Research Professor (DORA) at the University of Melbourne. His recent publications include Multiplying Worlds: Romanticism, Modernity, and the Emergence of Virtual Reality (OUP 2011).

Catherine Robson is Professor of English at New York University, where she specializes in nineteenth-century British culture and literature.  Her Heart Beats: Everyday Life and the Memorized Poem just won the North American Victorian Studies Association’s Best Book of the Year award.

Michael E. Sinatra is Associate Professor of 19th-century studies at the Université de Montréal. He is the author of Leigh Hunt and the London Literary Scene, 1805-1828 and the founding editor of Romanticism and Victorianism on the Net.

Andrew Stauffer is Associate Professor of English at the University of Virginia, where he also directs the digital federation NINES and runs the Book Traces project.  He is the author of Anger, Revolution, and Romanticism and numerous articles on nineteenth-century literature. 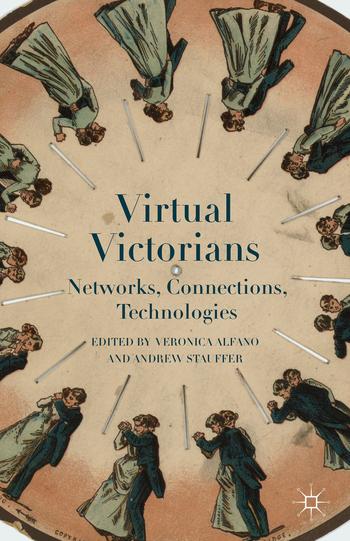 Here at the digital annex to Virtual Victorians: Networks, Connections, Technologies, you will find supplementary images and sample content related to the hardcover collection of essays published by Palgrave in May 2015.

Virtual Victorians: the title of this volume of essays, each of which attends to issues of representation and media change in nineteenth-century literary culture, evokes a series of gaps: between the real Victorians and the virtual ones, between sheer presences and imagined avatars, between the made-analog nineteenth century and the born-digital now. Indeed, such divisions increasingly animate our conversations about the Victorian era, as it fades decidedly into the past -- now two centuries removed, all of its residents dead, its creaky media and communication technologies more distant and more strange each year. We might well ask, what now do the Victorians have to do with reality? Yet such alienation also brings an enabling perspective, and a set of tools for research and thinking that might alter our vision of the nineteenth-century.  As time and technology make plain that our Victorian period will henceforth always be a simulation or constructed model, we can investigate more assiduously those networks of remediation. Put another way, we can exploit the virtual to make the past operational. At the same time, we are able to see more clearly the era’s own immersion in virtuality, both optical and textual, as a result of its own novel technologies and networks.

Our own virtual Victorians come to us out of the archives, which are increasingly available to computational analysis via digital surrogates and models of various kinds. The nineteenth century, and the Victorian era in particular, have been exceptionally rich target areas for digitization, given the plenitude of material produced by the industrial press, its freedom from copyright restrictions, its often visually rich texture, and its informational complexity as part of a rapidly-changing media landscape. Early scholar-built digital archives such as the Rossetti Archive set the standard for online editions and led to the digital federation NINES (Networked Infrastructure for Nineteenth-century Electronic Scholarship) that has peer-reviewed and aggregated work in this area. At the same time, commercial providers such as ProQuest and Gale/Cengage have been assiduously building digital collections of Victorian periodicals and newspapers, and the Google Books project has been amassing great ranges of Victorian digital content from academic library shelves. Libraries themselves are contributing growing amounts of digitized content (often focused on manuscripts and other unique collections), and new partnerships between digital humanists, librarians, and scholars have produced projects like The Shelley-Godwin Archive and Leigh Hunt Online. It is unquestionably an exciting time to be a Victorianist, with all of this material opening up before us in new ways, made available to new kinds of analysis.

A.E. Housman’s Shropshire lad catches something of this spirit via “an air/ From yon far country,” one that brings with it a vision of the past that is at first bewildering and ultimately wrenching:

Into my heart an air the kills
From yon far country blows:
What are those blue remembered hills,
What spires, what farms are those?

That is the land of lost content,
I see it shining plain,
The happy highways where I went
And cannot come again.

At the far end of Wordsworth’s century, the Victorian poet austerely recasts the “sad perplexity” of his Romantic forebear by pitching the revisited landscape into the realm of the virtual. The hills, spires, and farms are “remembered” in the first stanza, but what shines plain is not the Wye valley, or the Shropshire village, but “the land of lost content,” with its “happy highways” now closed to foot traffic. Virtual paths are those upon which we cannot really travel: the past is the land of the lost. And yet, as our tools for creating rich representations of Victorian literary culture expand in capacity, we have an opportunity to see that world shining plainer, bluer, maybe even happier than before. The virtual Victorian era that is emerging from our algorithmic searches, our digital editions and tools, and our data visualizations necessarily reflects that era’s own navigation of changing media and information technology. What will we find in that “land of lost content”? The very term wobbles. “How long do you mean to be content?” asked Shelley’s visionary double on the terrace at Pisa, soon before Shelley himself joined the world of virtual presences that would haunt the Victorian century so assiduously. We hope this collection of essays will suggest new ways of thinking about Victorian content – the archive and its affect, now and then.