Working on the principle, established by Anne Friedberg, that the virtual realm was “an operable philosophical concept in the late nineteenth century,”[1] this chapter demonstrates how the idea of virtual reenactment lay at the heart of the pictorial representation of the Prince of Wales’s tour of India in 1875–76, and was a key factor in this event’s popular success in Britain. Taking virtuality, in its modern conception, to be an artificial simulation of reality, this chapter reveals the virtual dimension of the mimetic techniques used to recreate the prince’s journey in the pages of the illustrated press. The prince in question was Albert Edward (nicknamed “Bertie”), the eldest son of Queen Victoria and Prince Albert, who subsequently reigned as Edward VII. His tour of India lasted four months in total, while the entire journey took seven—from October 1875 until May 1876.

Four artists, three working for the illustrated press and one for the prince himself, were tasked with the project of visually documenting his entire journey. These so-called Special Artists, or artist-reporters, accompanied him everywhere, sending a steady stream of the resulting imagery back to Britain via the pages of The Illustrated London News and The Graphic. On their return, two of the main artist-reporters involved in the tour participated in special exhibitions in London, showcasing the more finished versions of the sketches they had produced for the press. This ensured that the British public’s imaginative engagement with the prince’s Indian tour was intensely sustained for about a year. While the art critics reviewing these exhibitions generally struggled to evaluate the works artistically, they admired the artist-reporters’ remarkable ability to convey a sense of vicarious experience.

This study positions the category of pictorial reportage firmly within the discourse surrounding the phenomenon of “virtual travel” – that is, the vogue for recreating actual or imaginary journeys through the medium of illustrated representations, which began in the eighteenth century but proliferated in the nineteenth with the growth in mass media industries. The visual reports of the Prince’s Indian journey were undoubtedly examples of virtual travel.

Figure 1. After William Simpson, The Royal Visit to India: The Ganges, wood engraving, The Illustrated London News, January 22, 1876, 77, © National Portrait Gallery, London.
Revealing his adherence to the traditions of the topographical artists, known for their depictions of exotic vistas made from “on the spot” studies, William Simpson’s timeless, picturesque image of menacing crocodiles on the banks of the Ganges at sunset, openly invites the reader of the pictorial press to revel in a moment of unalloyed virtual tourism (Figure 1).

Figure 2. William Simpson, Illuminations at Benares. 5th Jan. 1876, watercolour, touched with bodycolour, over graphite, 1876, © The Trustees of the British Museum.
Conversely, Simpson’s recreation of the illuminated scene he observed during the Prince’s visit to Benares, with its inclusion of precise factual references, has particularized the view to that experienced by the Prince of Wales and his entourage at a certain time and place (Figure 2). Indicative of the development of a new journalistic idiom for art, this work also demonstrates the lyrical quality of the finished watercolours Simpson prepared as part of the documentary process.

Figure 3. After William Simpson, The Prince of Wales Lunching in the Caves of Elephanta, wood engraving, The Illustrated London News, 11 December 1875, 588-9,  © National Portrait Gallery, London.
By structuring the fresh imagery being supplied by the artist-reporters around reiterations of the classic artistic views of India, cumulatively established since the eighteenth century, the illustrated journals purposely evoked the imagined topography of India as the virtual arena for the Prince’s actual journey. Simpson’s striking view of the Prince and his party enjoying a very English lunch party within the sacred confines of one of India’s most famous archaeological sites demonstrates how the artist-reporters appeared to figuratively embed the Prince within this imagined landscape. (Figure 3.) It also indicates the inherent visual politics of this kind of appropriative imperial imagery.

Figure 4. William Simpson, Figures - Laying Foundation Stone with Masonic honours by the Prince of Wales, of New Docks. Bombay. 11th Nov 1875, 1875, pencil, from album of Sketches Made in India, © Victoria & Albert Museum, London.
Ultimately, the pictorial reenactment of the prince’s tour enabled by the illustrated journals was contingent upon the mode of production of their “illustrative art”. Extant copies of the pencil drawings William Simpson made while observing the events in India, such as this one drawn during the Prince’s performance of a masonic ceremony in Bombay, provide a rare glimpse into the working methods of a professional artist-reporter (Figure 4). They show how the artist made quick, shorthand notes detailing the profiles, costume, and physical appearances of key participants in the event.

Figure 5. William Simpson, H.R.H, The Prince of Wales at the School Children’s Fete Bombay, 10th November 1875, 1875, pencil with grey wash and white, ©CSG CIC Glasgow Museums and Libraries Collection: The Mitchell Library, Special Collections.
These drawings then informed the production of an “illustrator’s sketch” – a more-polished draft composition in pencil, ink, and wash – that provided the artist’s subjective impression of the most definitive aspect of the witnessed event. This surviving example shows the Prince being garlanded with flowers by a Parsee schoolgirl on the 10th November 1875 (Figure 5). It demonstrates how, for the sake of speed, Simpson concentrated on detailing the look of the main characters in the scene, while only sketchily suggesting the forms and positions of the surrounding crowd. Typically, he then included descriptive annotations to guide the staff draftsman back in London.

Figure 6. After William Simpson, H.R.H. The Prince of Wales at the School Children's Fete, Bombay, wood engraving, The Illustrated London News, December 11, 1875, 569, © National Portrait Gallery, London.
A standard four weeks after the event, the wood engraving of the same view appeared in the pages of The Illustrated London News (Figure 6). A comparison of the two stages of the composition reveals how the engraver has retained and sharpened the essential features emphasized by Simpson – thereby preserving the indexical link to the actual event – while improvising the background detail given in the engraved version.

Figure 7. After William Simpson, The Prince of Wales on Board the State Barge of the Maharajah at Benares, wood engraving, The Illustrated London News, February 12, 1876, 149, © National Portrait Gallery, London.
Columns of descriptive text accompanied the illustrations. Simpson’s impression of the Prince seated on the Maharajah of Benares’s state barge was intensified by vivid details of the hull covered with “water-plants, fish and aquatic birds” (Figure 7).[2] This deliberate interplay between text and image conjured up a sense of animation – a characteristic noted by the critics of the day. The image concentrates on providing a close-up view of the Prince in the act of experiencing the occasion. A common motif in the visual accounts of the tour, this focus reveals the Prince’s function as a substitute visitor – an avatar for the viewer’s imagination.

Figure 8. After William Simpson, The Prince of Wales in the Terai: Crossing a Nullah in the jungle, wood engraving, The Illustrated London News, March 25, 1876, 297, © National Portrait Gallery, London.
Simpson’s portrayal of the Prince hunting in Nepal testifies to the artist’s skill in replicating the palpable environment of the jungle terrain, with its deep ravines (Figure 8). As with many of his images, the artist elicits from the viewer a strong empathetic sense of being physically located within the depicted space. His work, and that of the other pictorial journalists, also displays the motile quality needed to establish virtuality convincingly. Note, for instance, the implicit sense of the elephants’ heavy gait in this view of the prince’s party pushing their way through the Terai’s undergrowth.

Figure 9. Sydney Prior Hall, The Grand Chapter of the Star of India at Calcutta, 1 January 1876, sepia ink, white bodycolour, c.1876, Royal Collection Trust/© Her Majesty Queen Elizabeth II 2015.
The capacity for conveying a sense of immediacy is a paramount feature of the artist-reporter’s oeuvre, and the recognized common denominator of realist art forms identified as operating in a virtual manner. Sydney Prior Hall, the artist traveling with the royal party, was considered particularly adept at relaying a bodily sense of the events he attended. In this illustration of the Grand Chapter of the Star of India (Figure 9), Hall reproduced his firsthand experience of the elaborate, set-piece ceremonial scene by capturing the distinctive gestures of the watching crowd and by modeling the dense, heady atmosphere of the large, packed marquee with its clutter of ceremonial paraphernalia.

Figure 10.  Unknown photographer working for Bourne & Shepherd: Calcutta, Bombay & Simla, Arrival of the Prince of Wales at Bombay, India, albumen print, 9 November 1875, Royal Collection Trust/© Her Majesty Queen Elizabeth II 2015.
Obviously, the relative role photography played in the virtual agency of the pictorial reports needs to be taken in to account. This photograph of the procession of carriages conveying the Prince’s party into Bombay (Figure 10) is one of a relatively small number of actual scenes provided by Bourne & Shepherd, the leading photographic firm in India. Although highly evocative of the occasion, its location and the watching crowds – its “aura of suspended animation” reveals the limits of the type of photographic “realism” offered by the camera at this point.[3] Constrained by long exposure times, the photographer was only able to produce static, factual images; in contrast, artist-reporters could respond to the unpremeditated actions of the tour. As a result, it is the artists’ reportorial imagery that drives the visual narrative of the visit, while photography could only support the imaginative exercise by offering an intensification of the attendant detail.

"The Imperial Avatar in the Imagined Landscape: the Virtual Dynamics of the Prince of Wales’s Tour of India in 1875-6" 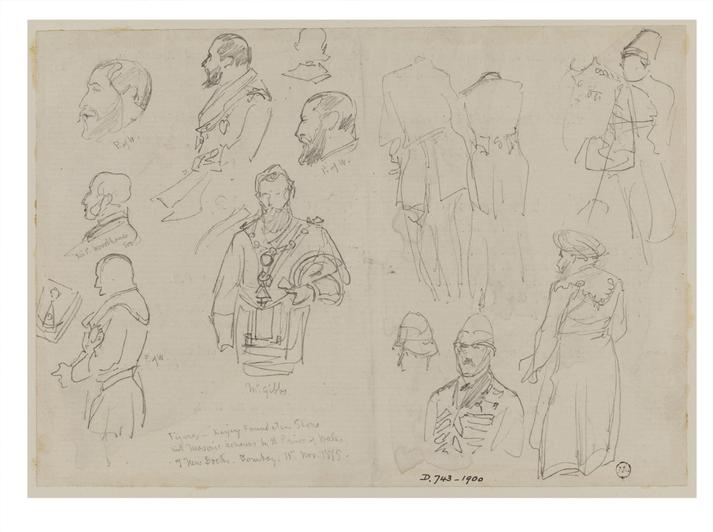 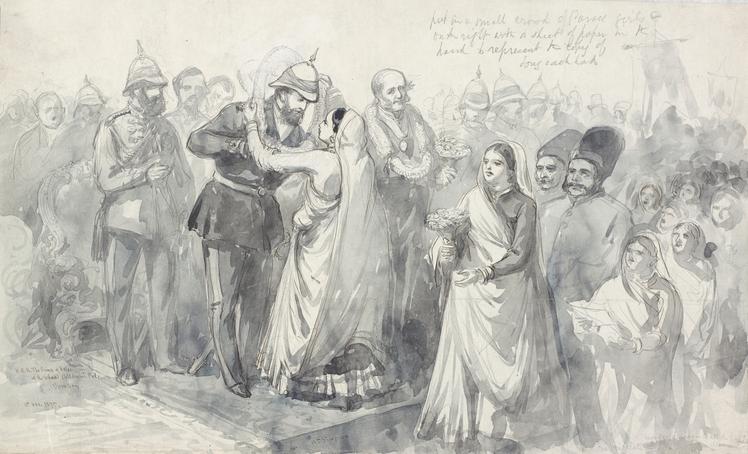 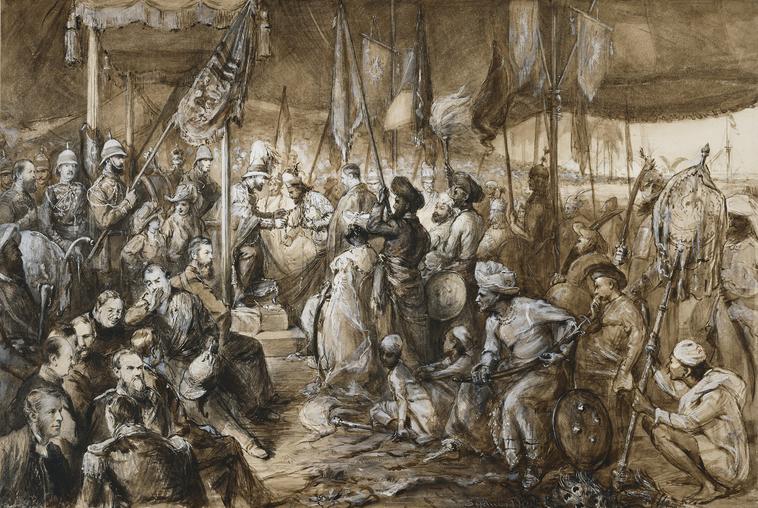 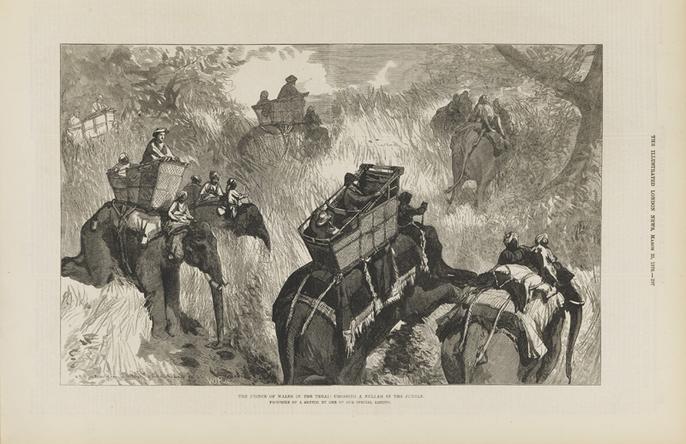 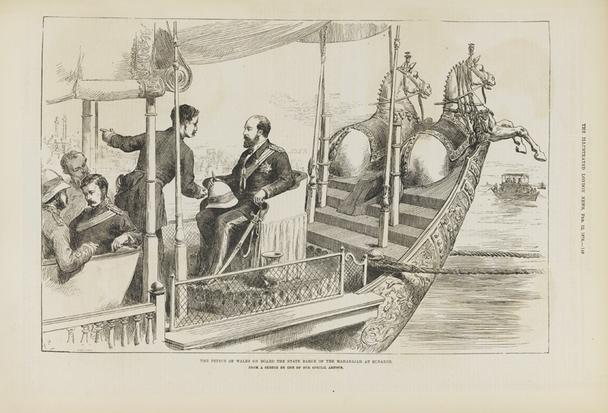 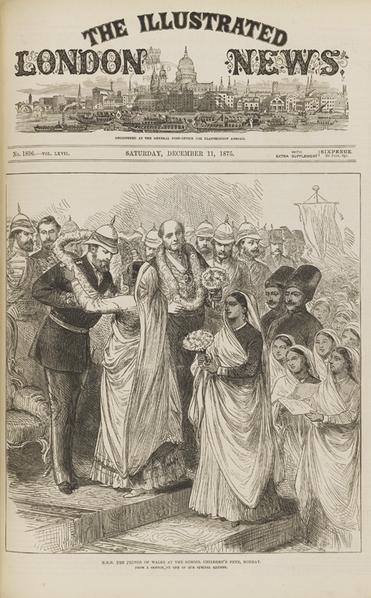 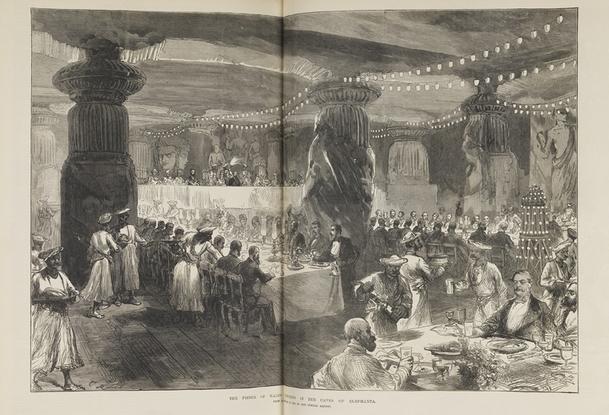 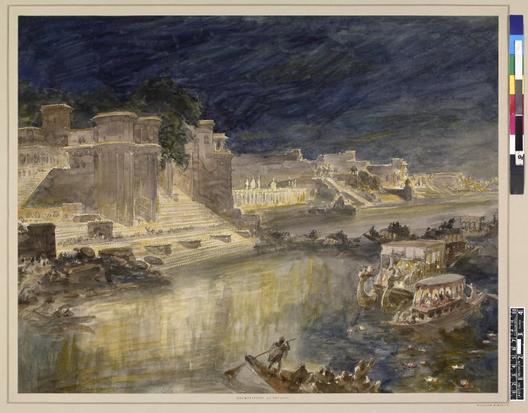 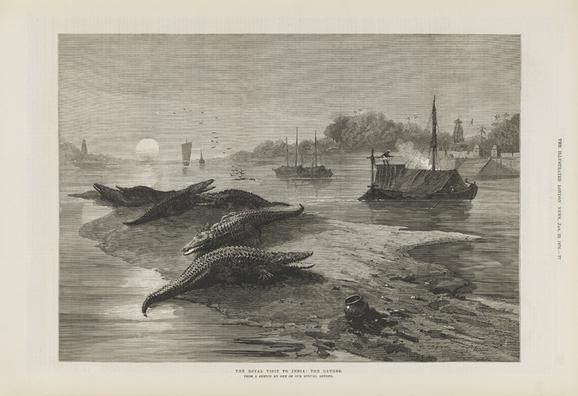