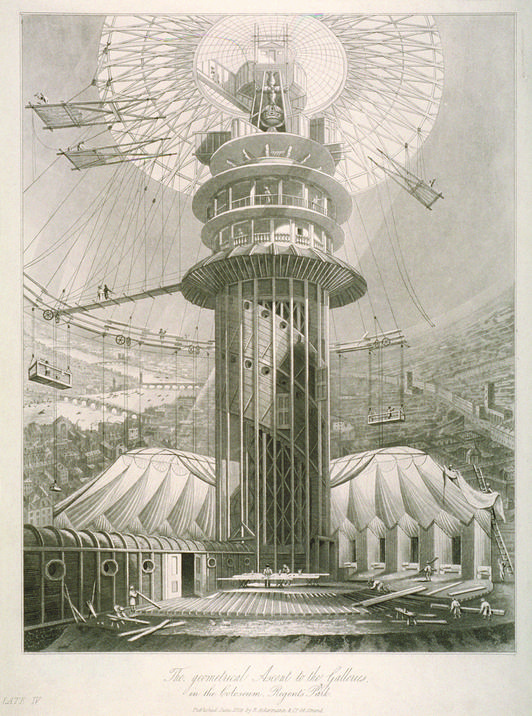 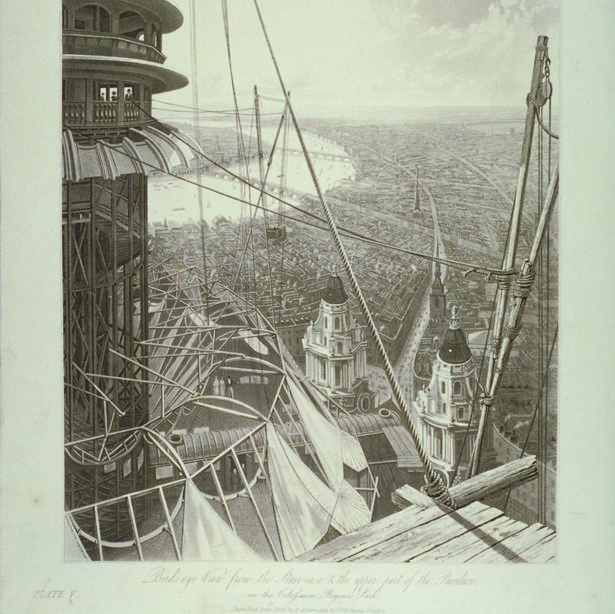 Artificial Environments, Virtual Realities, and the Cultivation of Propensity in the London Colosseum

“Presence” . . . is the first word that should come to mind in understanding the changes that are now taking place as art becomes science. What if presence can be re-engineered? Certainly, that is what is being attempted.

The panorama is routinely identified with the modern attempt to contain everything within a single view or picture and as such with one of the earliest steps in a narrative that leads, by way of the diorama and the invention of photography, to the moving images of the cinema. This narrative is often thought to culminate in the digital virtual-realities of our own era, which add “navigation, immersion, and interaction to the cinematic representation”;[2] yet this same contemporary development disrupts the narrative it appears to conclude. By recalling the panorama’s immersive virtual realities, digital virtual realities foreground a second narrative, an unruly counterpart to the first, which is driven by a logic of immersion and participation rather than detachment and representation, is more closely linked to Romantic rather than to Enlightenment thought, and suggests a significantly different relation between 19th- and 21st-century virtual realities.

A key stage in this second narrative, marked by attempts to extend and exploit the possibilities of immersion and participation opened by earlier panoramas, is represented collectively by the London Colosseum, built 1824-27 (Fig. 1), Thomas Hornor’s “Panorama of London” (painted 1825-31), which it was built to house (Fig. 2), and the numerous immersive virtual realities it constellated. Spectators were given, for example, an unprecedented degree of freedom to move around inside the panoramic illusion and then from that immersive world to other virtual realities, which, like the first, were closely identified with the creative work of artist, engineer, and entrepreneur. Further, the Colosseum was intended as an environment that could be inhabited for extended periods of time. Its second viewing platform, for example, included a refectory; the third doubled as a performance space; the grounds included a club and reading room; and so on.

As this suggests, rather than merely re-presenting the real or communicating a particular ideological message, the Colosseum is an early experiment in the use of affective space to cultivate propensity, which is understood as a potential that can be exploited. Its virtual realms entice immersants to become cocreators—who through conversation, imitation, and display help shape the virtual worlds that, in the mode of anticipation, have drawn them there. In these developments it is possible already to see, albeit in nascent form, aspects of our own world in which, as Nigel Thrift argues,

no longer can the value form be restricted to labour at work. It encompasses life, with consumers trained from an early age to participate in the invention of more invention by using all their capabilities, and producers increasingly able to find means of harvesting their potential.[3]

This development, and the (relatively open-ended) affective environments on which it depends, reject the logics of representation/expression, surface/substance, and simple-past/sophisticated-present that have governed histories of the West’s visual cultures. Instead they offer terms that describe the space between these poles: imitation, habit, milieu, and (affective) atmosphere, among others. Now, in the early twenty-first century, “affect, imitation-suggestion, and entrancement” can no longer be thought merely romantic and as such “incidental to what the political is and how the political is conducted.” Rather, they form the foundation on which new forms of oppression and “more expansive political forms” (both based on a scientifically sophisticated understanding of the malleability and mechanics of propensity) can be built.[4]  In this context the Colosseum, along with the panorama phenomenon as a whole, should be considered an important stage in the journey that has brought us to this new-but-old world.

Although in this image the Colosseum is not yet complete, its three galleries are clearly visible, held aloft by a large vertical column that contained at its centre the world’s first commercial passenger-lift. Above the third gallery, one can see the copper ball that once stood at the summit of the dome of St Pauls (it was salvaged by Hornor); a facsimile of the cross that once stood on top of it; and above both the wooden cabin from which (perched above the real St Pauls) Hornor made the preliminary sketches for the “Panorama of London.” Recalling the third temptation of Jesus, the creator of this panorama once stood on “the pinnacle of the temple” (Luke 4: 9), and audiences, while inside his creation, are given the same visionary point of view.

The spectators visible on the first observation platform represent those who explored the Colosseum before it was complete. They found themselves in the midst of a vast virtual reality, in the process of being built, the horizon of which composed a circle of nearly 130 miles (John Britton, A Brief Account of the Panorama (1829). The design shows the view to the west, over the campanile turrets of St Paul’s, to Fleet Street, the Thames, Westminster, St James Park, and, far in the distance, Windsor.