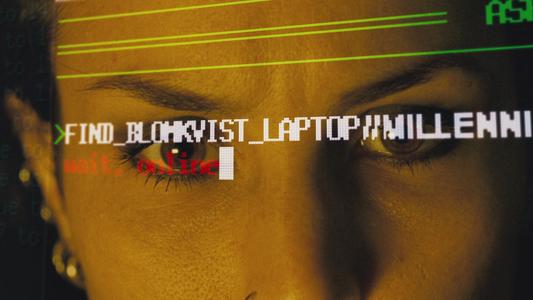 How We Search Now: New and Old Ways of Digging Up Wolfe’s “Sir John Moore”

I begin not with the Victorian period but with our own millennium—with, in fact, the Millennium trilogy, the phenomenally successful series by Swedish crime writer Stieg Larsson, the first of which, The Girl with the Dragon Tattoo, was published posthumously in 2005.  Let me be more precise: I begin with the 2009 film adaptation of this novel, directed by Niels Arden Oblev, a movie that enjoyed widespread critical and commercial success and was later remade into an extremely faithful 2011 American version. Even if you have not read the books or seen the films, you have probably heard something about them, most likely something about their central figure, Lisbeth Salander, who has been hailed as both a postmodern heroine and a striking alternative icon for our times; certainly Noomi Rapace’s performance in this role in Oblev’s film creates an unforgettably powerful image. Salander is introduced to viewers as an unnervingly gifted isolate, a multiply-pierced and tattooed loner who is preternaturally skilled at penetrating the complex network of encrypted information systems in which she makes her living as a private investigator. In the movie’s establishing phases, Salander’s connection to her laptop is her most important relationship; her primary identity is that of a punk cyberhacker who exists most comfortably in webs of digitized data. To make this clear, Oblev presents numerous images of the top half of Rapace’s face reflected in her computer screen. Lines of digital text run across her eyes and forehead, as if to illustrate that her visual and cognitive capacities are entirely merged with those of her Mac; the central processing units of brain and computer, we are to infer, work as one.

Later on we become all too aware of Salander’s vulnerable corporeality. In a scene that viewers invariably find the most disturbing of the film’s many violent sequences, she is the victim of a brutal anal rape by her state-appointed guardian. But instead of taking us to the dark interior of that abuser’s bedroom, I move now to another badly lighted space, a location to which Salander is led by another older male figure in the film’s denouement. On this occasion the man is an archivist and the place is an archive, the holding space of a large Swedish business conglomerate’s records. To pursue her research into a series of murders and disappearances half a century earlier, Salander must walk through floor-to-ceiling stacks of cardboard files and hand-written ledgers, and lug box after box of documents to a little desk set amid the gloom. Poring over these papers, Salander starts to figure out the answer to the mystery but finds that there are more materials she needs to examine. When she returns to the chronologically ordered shelves to find the boxes for 1951, 1952, 1953, and 1954, Oblev repeats the visual strategy he employed earlier with Rapace’s eyes and forehead. This time, however, he superimposes the green rectangular spines of the numbered files across the top half of her face. Back at the desk with its growing pile of faded receipts and reports, Salander opens her MacBook to cross-reference a photograph of the suspected murderer in an old company magazine with one stored on her hard drive. The verification is made, and the killer’s identity is revealed.

This is the film’s big “aha!” moment, but I do not draw attention to the scene because of any particular interest in the solution it presents. Rather, I am concerned here with method—with the ways in which the film takes pains to establish that the answer is found only because of Salander’s ability to search and think in both new and old modes. Oblev underscores this point most obviously with those two composite visions of his heroine’s face; via this pair of images, he shows that Salander’s consciousness can merge with the protocols of digital and print media. Modernity may offer the skilled analyst incredibly sophisticated tools for gathering and interpreting information, but to make sense of the past’s continued grip upon the present, a heroine for our times must also be able to engage with historical records in a more traditional fashion.

As it is with Salander, so it is with literary scholars today. This essay foregrounds the following fact: even with all our search engines and our Web proficiencies, our digitized media and our handheld electronic devices, sometimes we, like Salander, can only find out the truth—or what passes for truth in the world in which we operate—by looking closely at the box file, the handwritten ledger, and that assemblage of pieces of paper, the book. Most of us, I believe, thus spend much of our time operating as Salanderian double agents—that is to say, we conduct our research in both newfangled and oldfangled ways. These truths may seem self-evident, but I state them here so that I can proceed to the following question: what insights might be gained if we took conscious account of the hybrid nature of our current working methods? In our zeal to attain other, seemingly more urgent, goals, we may not comment on this hybridity in our published writings, but I suspect that many of us think about it a great deal and are aware of how it skews—or in some way affects—not only our findings but also what we say about them. The following pages represent an attempt to be candid about the use of different research methodologies and archives in my own scholarship, and to reflect upon some of the things I learned when I switched between them.